Write What You Know

WRITE WHAT YOU KNOW

If we all wrote only what we know, the literary world would be choked with memoirs and books on accounting, but it would be difficult to find a good murder-mystery – at least one written from the murderer’s perspective. Writing something strictly based on what you know can narrow the creative margin and squeeze out imagination. Besides, it’s fun to make stuff up!

Nonetheless, personal knowledge can be a good starting point. Depending on your approach to writing and your particular genre, your perspective may grow AS you write; hence, what you KNOW may actually evolve. Therefore, there is a close connection between KNOWING and REALIZATION.

If you use what you know as a stepping stone to cross the river dividing fact from fiction, you can end up in a highly plausible, realistic landscape that isn’t exactly what you know but seems like it could be. In other words, you’re using your knowledge base, gleaned from personal experience, keen observation and brain-breaking research (or not) blended with a big scoop of creativity, to provide a story that sounds so authentic people will wonder if it really happened. Maybe part of it did. Or, maybe you’re just a good writer! 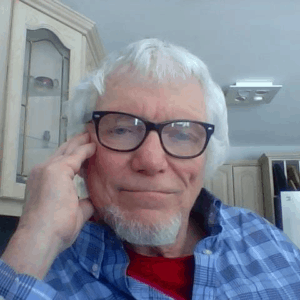 David Bruce Patterson, has been a resident of Bracebridge since 2013 and is spending his retirement writing daily, starting off his morning with a poem. He has published a family saga of Toronto and Muskoka in the 1920s entitled Square Wheels and a poetry anthology, Forthright but Furtive. He is now working on two novels.

Author Jenny Cressman was born in Kitchener, Ontario, the provincial heart of Mennonite country, where her family roots run deep. She grew up in Scottdale, Pennsylvania, but returned to her homeland to study at the University of Waterloo. After living in various parts of the United States and Canada, she eventually settled in Muskoka.

Her tandem careers in journalism (including time as editor of Muskoka Magazine and other publications) and at a shelter for abused women provide some of the threads for her fictional writing, as does her own life. She artfully weaves these with her travel experiences in Cuba, her extensive reading about the country and her personal observations on Cubans and their relationships with tourists. Embroidered with memorable characters, the resulting tapestry she has created is the colorful, realistic world of the Cuban Kisses novel series.

Jenny has participated in the Muskoka Novel Marathon as a writer several times and has been involved in other ways throughout the past two decades. In the early years – before writers were as deliciously supplied with food as they have been more recently – she often delivered boxes of Timbits, usually around midnight. On one occasion, Jenny organized a kick-off event that featured a stand-up comedian and a musical ensemble. She also worked with MNM founder Martin Avery to edit the compilation, Best Muskoka Novel Marathon Stories 2000-2010, which is available through the Lulu online bookstore.