How to be Ridiculously Prolific at an MNM
Panelists: Lenore Butcher and Pat Flewwelling

Join Lenore Butcher and Pat Flewwelling, prolific writers extraordinaire, as they give us their tips and tricks on how to squeeze the most words out over your marathon. 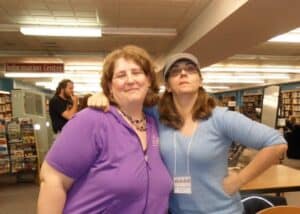 Lenore Butcher – Lenore’s first Muskoka Novel Marathon was in 2014.  She had not met any marathoners prior to signing up.

Ironically, Pat was the first person she met that fateful weekend.  They spent most of the weekend chasing each other up the paper flag ladder.

The best things about the Muskoka Novel Marathon are the friends made, the food eaten – and the words written!!!

Pat Flewwelling has been slinging words (and lots of them!) at the Muskoka Novel Marathon since 2009. She has won our Most Prolific Writer award six times, and regularly churns out more than 300 pages over the three-day marathon.

Pat writes non-fiction, science fiction, fantasy and horror and has published seven books as well as a handful of short stories.

A huge thank you to our writers, fundraisers and s

We are so excited to sit down and write with you!!

The #muskokanovelmarathon is coming up! We know th

Come join us for the Muskoka Novel Marathon on Jul

Do you love getting cozy with a cup of coffee? We

What is the Muskoka Novel Marathon? It’s an oppo

Looking for a space to write? Check out the #Musko

It’s coming soon!! The #muskokanovelmarathon is